We toilet trained Little Man a few weeks ago now, and he was dry very quickly as after just two days, he’d got it. This continued for 2-3 weeks with not one single accident, and though he was resistant to pooing on the toilet, he was managing it. And then the regression hit. A full-on regression.

He had one or two accidents a couple of days apart, and then within the week, he was weeing and pooing in his pants every single time. He was actually worse than the couple of days it took him to get the hang of it all in the first place.

The trigger? I’m not entirely sure. He didn’t like going for poos so I can only guess that one of those occasions was particularly uncomfortable or upsetting for him, which then had a knock on effect of not wanting to go to the toilet at all.

It was frustrating. I’d expected there would be accidents and I’d thought there might be a minor regression at some point, though I was thinking that’d perhaps happen when he started nursery in the new year, but I had not imagined we’d be back to square one. Well, arguably worse than square one as at the beginning he was attempted to make it to the toilet, at least.

This all began around two to three weeks ago, and I do at last feel that we’re coming through it. I see light at the end of the tunnel, which is a relief as I’d spoken to friends who had experienced similar things with their little ones, and it had gone on for months. I hugely appreciate their tips and wisdom, and I’ve no doubt it has helped us. So here are my tips for dealing with toilet training regression… 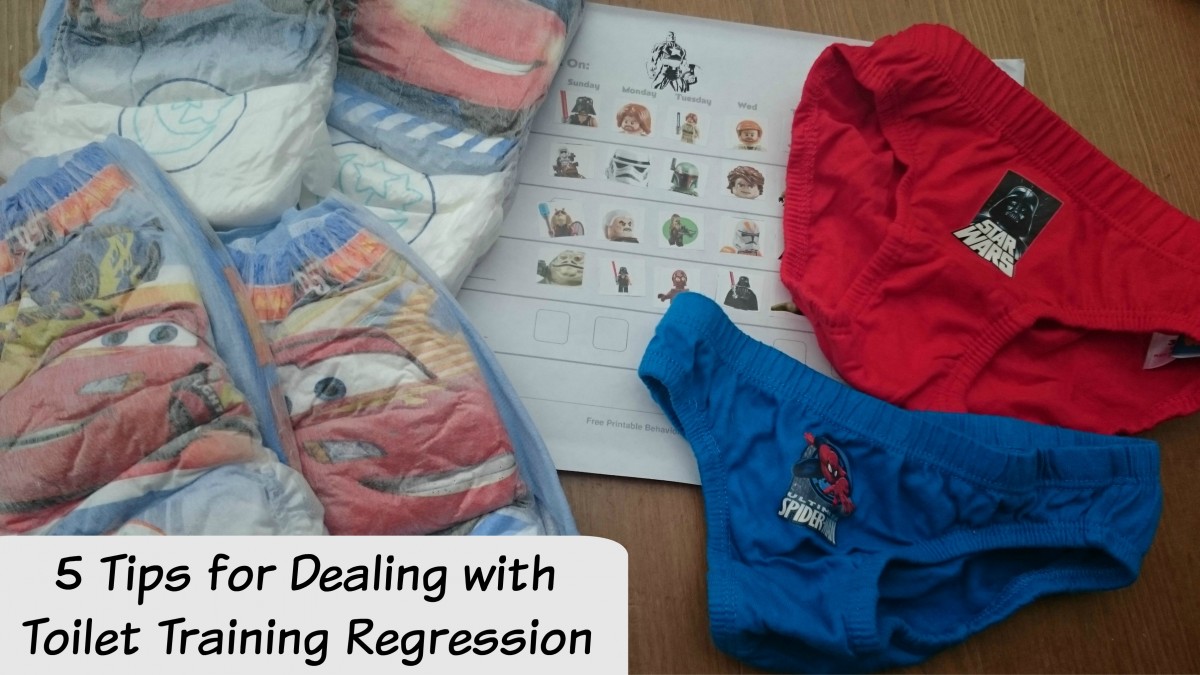 1. Accept it. If they were happily going to the toilet all the time, with few accidents, they were toilet trained. If all of a sudden they are reluctant to go or having an increasing number of accidents, then they are showing signs of a regression.

2. Go back to basics. If rewards worked initially then try them again. If they enjoyed choosing new underwear, pop and get some more together, or perhaps they just like selecting them each morning. My son has enjoyed getting a little treat when he goes, and if bribery works, then do it!

3. Stock up on underwear and HUGGIES Pull-Ups. We have got through a lot in the last few weeks. You might as well stock up on them, and wipes, so that you are prepared and running out doesn’t add needless stress to the process. The Pull-Ups have been real sanity savers as they’ve meant we can still get out and about whilst dealing with this, they definitely make potty training easier.

4. Address potential physical issues. We visited our doctor and came away with Lactulose that Little Man now takes twice daily. We’re also ensuring he drinks plenty and are increasing his fibre intake. He can be an unpredictable eater, which I know doesn’t help, as despite serving him certain foods at mealtimes, it doesn’t always mean he’ll eat them, so we’re working to address that, too. With all of these things, it means he is no longer struggling to go to the toilet, which in turn means he’s not scared of going.

5. Remain calm. This is by far the hardest tip of all to carry through, but also the key to getting back on track. I have not remained calm throughout this process. It has been frustrating and difficult to understand. I have shouted, I have cajoled, I have pleaded and I have sighed. When you know that they can do it as they have done, it can be hard to understand why they’re then seemingly ‘choosing’ to stand there and do it in their pants. But they do, I get that, and by ignoring the accidents, remaining calm, giving plenty of attention and praise when it does go right, we’re now coming out the other side. Phew.

Have you experienced this with your little one? What worked for you?

Disclosure: I am a HUGGIES ambassador

4 thoughts on “5 Tips for Dealing with Toilet Training Regression”