With my son starting school this September, I’ve started to build up a fun chapter book collection for him as he starts to learn to read. I am passionate about encouraging a love of reading in my children and arguably more so with my youngest than my daughter. She devoured books from birth, whereas my son has to be in the mood to pick up books during the day. He loves his bedtime stories every evening and we have recently started reading him chapter books, and it’s great to see how excited he is by them. I am very aware that statistically boys tend to be less enthusiastic about reading than girls, so I want to do all that I can to ensure my son loves his books from an early age, so I have been hunting around to find brilliant books for young boys.

We’ve been talking about starting school and one of the things that we’re focusing on is excitement around learning to read, and with this, Little Man has been very keen to help me choose books with him. I think the key is finding those topics that really hook him in and make him excited to read on, and I do realise that’ll be different for everyone. For my son, he loves super heroes, Star Wars, pirates and adventures, slightly scary and spooky things, and pretty much anything funny or disgusting! He will be five when he starts school, starting the day after his fifth birthday, so here are a some of the best chapter books for boys that we have found so far… 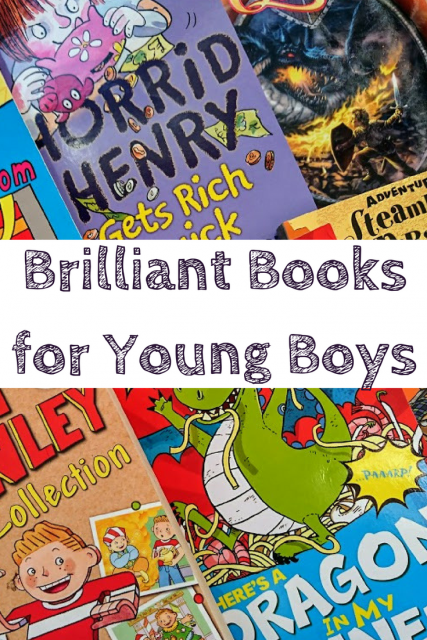 When Horrid Henry gets nits, and his little brother Peter Perfect doesn’t, he makes sure that everyone else gets them too. After that, he can turn his attention to sabotaging the school trip, ruining his parents’ dinner party, and terrorizing Peter.

There are loads of these books, some available in early reader format. We have several already, these are very popular here!

‘That’s the one!’ she cried. ‘That’s the bottom I’m after. Darling, you have the most gorgeous bottom!’

Nicholas’s dad has a plan to make some fast cash. Nappies! Some disposable-nappy people are looking for a beautiful botty for their new advert – and all Nicholas’s baby brother has to do is pass the audition. What could possibly go wrong?

The Leaky Battery Sets Sail (Adventures of the Steampunk Pirates)

Wanted: Dead or Alive! (Or smashed into little bits and delivered in boxes.)

The robotic Steampunk Pirates are roaming the high seas, hunting for gold! But the evil Iron Duke has other ideas… He’s determined to capture the pirates in return for a handsome reward from the King. Can the mechanical marauders stay one wave ahead of their enemy?

Life in Bogeydom is full of snot, smells, slime, scum and other unspeakable things, and Bogeymen live under the ground revelling in allthe nastiness imaginable. Briggs has created a whole new world in this sophisticated cartoon-strip picture book for older children which will entice the most reluctant of readers into books.

There’s a Dragon in my Dinner!

Small dragon … big trouble! When Eric finds a tiny dragon nestled among the beansprouts in his Friday night takeaway, he thinks it’s a free toy. But Pan the Mini-Dragon is very real indeed ― and he’s about to get Eric into a whole heap of trouble… How is Eric going to explain the trail of devastation caused by one creature not much bigger than a spring roll?

Stanley Lambchop is an ordinary boy with an extraordinary problem. One night, a giant pinboard falls on top of him leaving him completely flat. At first, Stanley enjoys the benefits of his strange predicament – it can be fun going in out of rooms simply by sliding under the door. And it’s a hoot being posted to your friends in California for a holiday. But it’s not always easy being different, and, once the novelty begins to wear off, Stanley wishes he could be just like everybody else again. But how will he ever fill out?

The Adventures of Captain Underpants

When naughty George and Harold hypnotise their headteacher, they accidentally create the greatest superhero in the history of their school — Captain Underpants! His true identity is so secret that even HE doesn’t know who he is… but he’s fighting for truth, justice, and all things pre-shrunk and cottony!! If you’re a naughty villain like the diabolical Dr Diaper, watch out! Captain Underpants has wedgie-power on his side, and he’s coming your way

An evil wizard has enchanted the magical Beasts of Avantia – only a true hero can free the Beasts and stop them from destroying the land. Is Tom the hero Avantia has been waiting for? Join Tom as he braves Ferno the Fire Dragon in the first of this bestselling series for boys…

We also have several early reader Star Wars, Marvel and DC books, along with storybook anthologies of all them. Similarly, the magazines and comics versions of these go down well, and Little Man likes to read them over and over again. I think finding books connected to favourite toys, characters, films and TV shows really works well.

Boo has many Roald Dahl books, Enid Blyton classics and the Harry Potter series, so he’ll have plenty more to read from her shelves, too.

Little Man is very excited by the idea that when he starts to read he will be able to stay up a little later each night and read to himself like his sister does, another big draw!

What else would you recommend we get?