Today we have a guest post from the lovely Zena’s Suitcase, as she shows us how to make paper flowers from books… 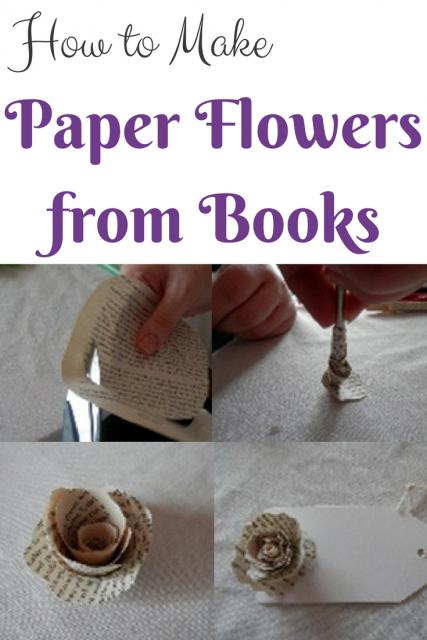 How To Make a Book Flower

I’d been sat outside this shop for a while, the noises were very different to the bookshelf but I was used to them now. All I can remember before that was being sat on my nice comfy shelf, getting a little bit dusty. I’d been there for a while. No one had cracked my spine for such a long time, I was feeling very unloved but it was still home at least.

One day someone came who I didn’t recognise, perhaps I was going to be read! At last, I thought. A book needs to be read like you need to breath, it keeps us alive. I started to get that excited feeling when you know each page is about to be turned. I was taken off the shelf all right, but then I was thrown into a dark space. There were other’s in there, I know that. I banged into the Encyclopedia and then the lights went out. Now I’m here, in this basket. The sun is lovely and warm, but it turns my pages brown. Some days it’s not quite so warm and me and the other books huddle together, hoping that the people who look through us will take us to another shelf.

Today I got picked, today was my lucky day. I said goodbye to my friends, but it was quick. No one ever gets long before they make their exit. This always seems such a shame after we’ve spent such a long time together but we all knew how it worked.

It was a short journey and here I was somewhere new, with new friends. There was glue, he said he was the PVA kind, what ever that means. The scissors were very friendly, some were straight and the others took great pleasure in telling me all the different lines they could make one after the other. There were cards, tags and sticks too! Everyone seemed really happy, like something fun was going to happen. I started to feel excited too.

Some pages were ripped out of me. This was new, not like being read at all. My pages were cut into squares. The scissors seemed to be enjoying it, that’s for sure, I was still a little apprehensive, as I’m sure you can imagine.

The scissors then rounded the corners of the square, before cutting me from the edge into a spiral. They stopped in the middle leaving a circle that was about 2 cm round. This was important later on apparently.

The wavy scissors had a turn next. They went round the outside edge of the spiral making their wavy lines. The straight scissors were a bit miffed as they could have done this, but the wavy scissors said they were quicker. Ouch!

My page really did look funny after all this cutting! This funny spiral with a wavy edge was new to me. But I was still flat, this I was familiar with at least. Then came along someone I hadn’t spotted before. A quilling tool is what he said, but I hadn’t ever heard of him. He said he had done a lot with paper, which made me feel slightly better. The thin edge of my spiral was threaded into the tool with the flat edge at the end. I was wound round and round, trying to keep the flat edge together all the time until I was at the middle. I was glad when it stopped, I was starting to feel a little dizzy.

By this time the glue was really excited. I was taken off the quilling tool, and I unwound a little, with a bit of help from the lady. This was definitely a little more relaxed. She then put a good dollop of the glue on the bottom and on the circle that was left. When she stuck us both together I looked really different, just like a flower! I felt a little bit soggy, but after a while it seemed to start drying. I was going to stay flower. The other pages really wanted to join in now.

I’ve been given a whole new lease life. Some pages, sorry flowers, were stuck to sticks that were apparently meant for the garden. Some flowers were stuck to place cards, this would make a lovely vintage name card for any wedding. Some got to go on gift tags making an unusual touch for any present any time of year. This way I still get to make people happy, I’m not in a basket in all weather’s and I hopefully I get to be kept somewhere safe because people like me so much.

This idea has been adapted from Kirstie Allsop’s TV series where she originally used it to make rings.

Thank you so much, Zena! Those look absolutely beautiful, and I enjoyed the accompanying story, too. I love books and I adore flowers, so this is a rather appealing and talented amalgamation!

And if you’re now feeling crafty and creative, maybe you’ll enjoy How to Make a Pocket Letter…

7 thoughts on “How to Make Paper Flowers from Books”