I have been keeping a secret from the kids for a few weeks now. We were invited to the new Disney On Ice presents Dream Big tour last month and I decided that I’d like to keep it as a surprise for them, which I’ve not done before. I like to include them in my own excitement and the build up, but I thought a Friday after school trip out would be a fun thing to surprise them with, especially as Boo usually has her homework to do on a Friday after school – I just thought she’d be happier going to see the tour!

As you can imagine, the kids were thrilled when I told them what we were going to be doing when they came home from school. They just kept telling me ‘best surprise ever!’. And the excitement went up a gear when we arrived and they attended the pre-show meet and greet… 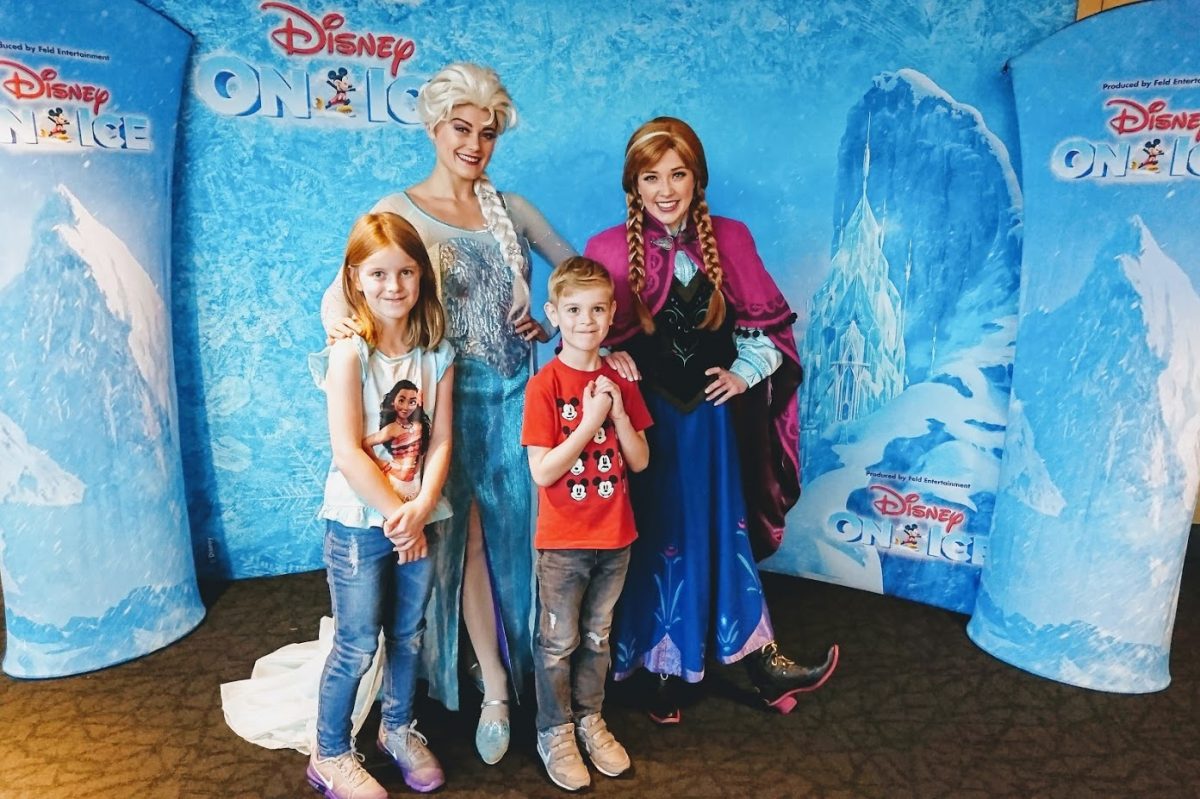 For the first time in Europe, join fearless Moana and the greatest demigod that ever lived, Maui, on an action-packed voyage to restore the stolen heart of Te Fiti, live on ice! Get tangled up in Rapunzel’s hair-raising quest to see the floating lights. Travel to mountainous Arendelle with Anna, Elsa and Olaf in a dramatic retelling of the sisterly love that saved a kingdom. And discover the strength, bravery and kindness that inspired generation after generation with Jasmine, Ariel, Aurora, Belle and Cinderella. Plus, arrive early to join a special 90th birthday celebration in honour of Walt Disney’s ‘True Original,’ Mickey Mouse.

Now I should preface this with the fact that Moana, Tangled and Frozen are amongst our favourite Disney films, but then surely they’re everyone’s favourites?! Such brilliant soundtracks, and yes, we own them all, of course. So to have all of these featuring in one show, along with Mickey Mouse and friends and so many other princesses was absolutely brilliant.

The lighting, the settings, the costumes, were all just perfect. And the songs? Oh, we loved singing along to those! The performance all felt so well-choreographed and rehearsed and all ran very smoothly. There was a pre-show warm up to get everyone moving about with Mickey and Minnie, and then we were straight into the action.

This show felt quite different to other performances that we have seen before. It seemed to be less about the huge sets and spectacle of them and more about the skating itself, which was amazing. When we have been before, there have been maybe three to four main Disney films as the themes within the show, often with big set pieces and props to support them. This tour showcases a lot more of your favourites, and is more about the skating and songs, not relying on or encumbered by huge sets. In this way, it felt really pacy as it moved from film to film and I really can’t imagine little ones getting restless as the evening absolutely flew by.

We cannot recommend this one enough. I was amazed by how many Disney characters and songs that they managed to pack into just one show, there were just so many hits in there. My two were mesmerised throughout, and I sang practically every word! We all had the best time, and as they always seem to be able to do, Disney made our evening absolutely magical.

You can find out more about the Disney On Ice: Dream Big tour, dates near you and buy tickets here.

Would this be a tour that your family would enjoy?

Disclosure: We received tickets FOC for the purposes of this post