We bought a tuff spot some time ago, and I must admit it’s tucked away so well, I’d pretty much forgotten about it. But having had a few days of staying in the house with us full of colds, I thought it’d be nice to get it out for Little Man, as something new and a little bit different for him to play with.

If you’ve not heard of tuff spots before, they’re essentially huge trays, like builders mixing trays, that you can then use for so many activities. I’ve blogged before about our Tuff Spot Recycling Play and our Outdoor Tuff Spot Painting, and I’ve a Tuff Spot Pinterest board with ideas on, too.

So this is where the ‘easy’ comes in. I wanted it to be a non-messy activity, mainly for my new kitchen‘s sake! Also, as this was one of those ideas that I had just a few minutes before actually doing it, everything needed to be readily to hand and comprise of things that I already had in the house. So I raided the craft cupboard and popped in shredded paper, plastic eggs, a few boxes, straws, paper and crayons. I then added in some dinosaurs, as really, you can never have enough dinosaurs, right?!

It was then all set up for Little Man as an invitation to play and discover. I like the idea of this sort of activity as it’s very much up to him what he then does with it, and the play that he comes up with is totally of his own making. I think it’s important that he can do this, and be creative and inventive enough to do so.

Initially, he was unsure, and was asking me what he should do and to get into it, too. But then after a couple of minutes of skirting around it, he was in! And he stayed in for quite some time, returning to it periodically throughout the day, and then on collecting his big sister from school, he was very keen to tell her all about it, and it took her literally seconds of arriving home, to be in it herself! 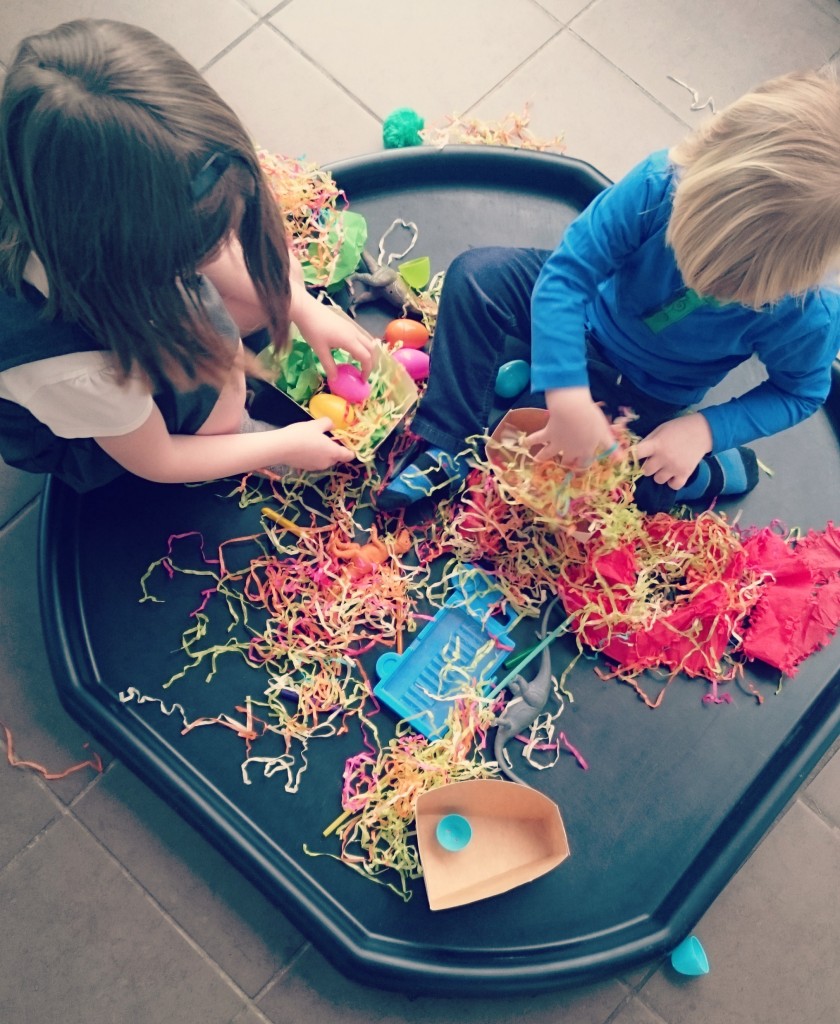 They both then happily played in there whilst I got on and prepared dinner, listening to them chattering away with each other, as they made egg nests, dinosaur lairs and played at taking it in turns to catch the shells.

This was so quick and easy to get ready, all of the materials used can be used again, no mess was made (well, if you exclude picking up shredded paper, which did make it outside the tray, too!), and both kids really enjoyed it and let their imaginations run wild with it. My kind of activity, and I’m so pleased I got that tuff spot out again. It’s got me back into it, as well as the kids, so I’m sure it’ll soon be making another appearance.

Is this something you can see your children enjoying?