Over the weekend, we had the absolute pleasure of going on The Making of Harry Potter Studio Tour. Today I wanted to share with you a few highlights from the day, and you’ll have to forgive me as I will be gushing about it. It was so good, we all loved it and I find myself already wanting to go back.

Boo and I are reading the Harry Potter books at bedtime and from the very first chapter of The Philosopher’s Stone, she was hooked. It’s been wonderful reading them again and experiencing them with her. We’re on The Chamber of Secrets now, and she’s a huge fan of Hermione. To get Little Man interested in the tour, we’ve let him watch snippets of the first couple of films, just enough to fall in love with Harry Potter’s world. He loves the characters (Draco is his favourite – my son’s odd like that!), the flying car and the Golden Snitch, and show him Dobby and he’ll laugh every time! So with the kids eager and excited, we set off for the tour.

If you’ve ever been on a Warner Bros tour before, you’ll know that they do them well. We went along to the Warner Bros Studio in LA a few years back (we got to sit on the Friends sofa – this remains exciting to me to this day!) and this was reminiscent of that. It’s a booked in advance ticket only event, enabling them to manage numbers well for each tour and the process is slick as you arrive and move through to the start of the tour. I don’t want to really detail all that this entails, as it’s all part of the magic of the day as far as I’m concerned, and I don’t want this to be a spoilers post, more of a taster.

There is so much to see, from sets to costumes to models to props to behind the scenes ‘making of’ and effects. After the initial guide, you are free to meander around everything at your own pace. The guide for timings is around three and a half hours, though you can spend as long as you want there once you are in. We walked across the Hogwarts bridge, stood on Privet Drive, stood in Dumbledore’s office, oh so many brilliant moments, so I think I’ll share with you a few of our highlights….

Children are given Harry Potter passports at the beginning of the tour, and for Boo, this was her absolute favourite part of the tour. There are 13 Golden Snitches to find as you walk around, so the kids were searching for them in each room according to the clues, then ticking them off. They were so excited every single time they spotted one. There are also 6 stamping stations positioned around the tour, which the kids enjoyed using. I think it’s a lovely keepsake to have from the day and they are both treasuring theirs. 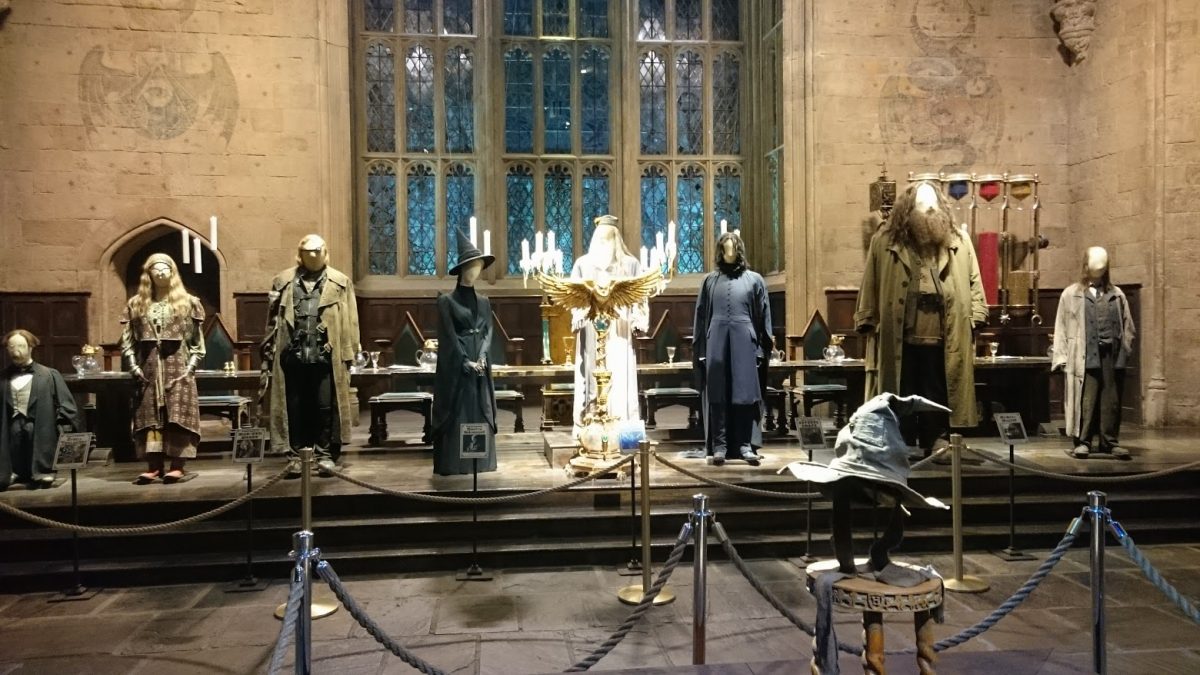 There is something so special about standing here. It’s huge and feels magical. The children screamed when they saw the Sorting Hat – we do all love that hat!

One of Little Man’s highlights. The Burrow has interactive displays, so you can wave your hand and get the iron to move or perhaps get knitting to magically knit. Very cleverly done, and he wanted to stay there for a long time!

How fabulous?! Here’s Boo outside Ollivanders, passport in hand, you see. A little further up, Little Man loved the sweet shop – if you’ve been on the tour you’ll know how revolting that display is, and it’s clear why he adored it!

As we rounded the corner to this part of the tour, we could hear the steam. As soon as he saw it, Little Man shouted and ran to get a closer look!

They so wanted to run through the wall!

The Hogwarts express and the platform are so iconic. I think people who’ve not read the books or seen the films would probably recognise this part of the tour.

As well as being able to see this from the street view, you can walk through it and see this room…

It was just ‘wow’. You can see a few people around it in the photo there, so that should give you an idea of how big this model actually is.

Yes, the shop is a part of the tour that my kids are adamant that I include as one of their highlights. It’s unsurprising when I consider how long we spent in there. We managed to talk Boo down from a full size broomstick with lights (no mean feat) and persuaded Little Man that he didn’t need a Harry Potter wand (they are labelled ‘fragile’ and he is 3, enough said!). Eventually, after around half an hour, Boo emerged with a Hedwig key ring and a toy wand and Little Man opted for Harry Potter glasses and an Aragog the spider. He’s not even seen Aragog in the films, he just liked him!

Then we were done. And we were all buzzing and chatting about how much we enjoyed it. And now we want to go back.

Have you been? What were your highlights?

Disclosure: We received complimentary tickets for the purposes of this post