I wrote the most difficult post I’ve ever written a few weeks ago, Put Yourself in the Picture. In it, I shared why Jo’s Trust is a charity that means so much to me, why I take cervical screening so seriously, and the story of a very close friend of mine and her battle with cervical cancer.

Jo’s Trust have recently been in touch with me again, as they have now launched their ‘Put Yourself in the Picture’ app, and have some information that they ask I share with you. Which of course, I’ll glady do, and ask you to just take a few minutes to read and please book those smear tests in if you’re due one….

‘Jo’s Cervical Cancer Trust, the UK’s only dedicated cervical cancer charity, has launched a new app as part of their Put Yourself In The Picture campaign to raise awareness of the importance of attending cervical screening which saves 5,000 lives a year.

Every day in the UK, eight women are diagnosed with cervical cancer and nearly three die of the disease. Cervical cancer is largely preventable thanks to the NHS screening programme and HPV vaccination, however each year one in five women who are eligible for screening do not take up their invitation, and for young women aged 25-29 this rises to 1 in 3.

Jade Goody’s death from cervical cancer in 2009 prompted more than 400,000 extra women to be screened in England, but sadly five years on, these numbers have fallen back to levels before Jade was diagnosed.

The Put Yourself In The Picture app aims to get people talking about cervical cancer again and encourage women to pledge to attend a cervical screening which could save their life. To use the app, simply visit www.jostrust.org.uk/selfie, upload a selfie or an existing picture into your chosen digital picture frame and share it with friends and family on Facebook and Twitter. Through the app you can make a pledge to attend cervical screening and also pledge to put your friends and family in the picture on cervical screening to help reduce your and others risk of developing cervical cancer. The app also features a live stats counter to track the number of pledges made and pictures shared so that together we can help prevent cervical cancer, potentially saving thousands of lives.

The app has been launched following new research which looked at the reasons why women in the first (25-29 years) and last (60-64 years) screening ages had delayed or not been for their cervical screening. For those aged 25-29 years, nearly half (49%) simply kept putting it off, a quarter (26%) were worried it could be painful or embarrassing and one in 10 feared what the results would say. 30% said that a friend reassuring them about the procedure would encourage them to attend. For women aged 60-64 years and potentially facing their last screening, a third (34%)  just kept putting it off, and one in 10 (13%) forgot all about it.

Robert Music, Chief Executive of Jo’s Cervical Cancer Trust, commented; “It’s very worrying that five years after Jade Goody’s death 20% of women still don’t attend a cervical screening which can prevent cervical cancer. By launching an app which enables people to literally ‘put themselves in the picture’ on cervical screening, we hope to put cervical screening at the forefront of women’s minds so that they don’t ignore their incredibly important screening invitation.  The app has been designed so that people can share their pictures and pledges on social media, so together we can address the decline in uptake of cervical screening in the UK.”’ 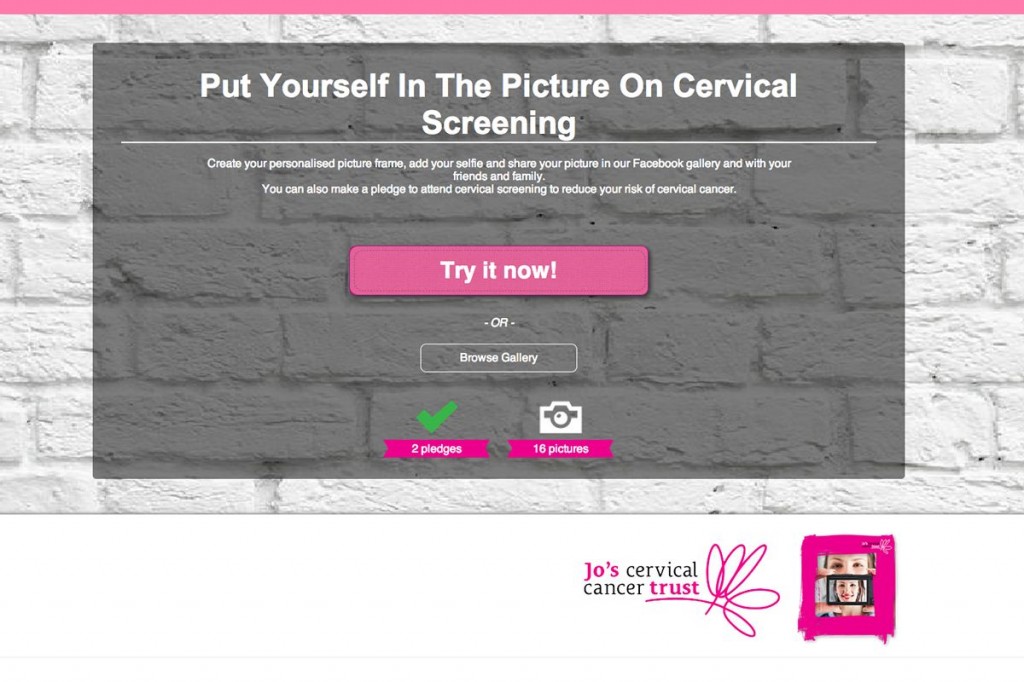 Thanks for reading, and if you’ve a couple of minutes spare, the app is really easy to use. Thank you.

4 thoughts on “Launch of the Put Yourself in the Picture App, by Jo’s Trust”