It’s been a little while since our furry friends featured here so I though an update on how we’re getting on with them would be useful, this is our family life with guinea pigs…

As you may know, we bought our guinea pigs during the summer holidays last year, and they are officially the kids pets.

Boo has Jessie and Little Man has Leia. Ah yes, the kids pets.

I clean them out, play with them, cuddle them and feed them twice a day. So as I suspected when I wrote my 5 Things to Consider Before Getting Guinea Pigs post, they really are all my responsibility.

I knew that would happen when I bought them, though. I’m sure there are kids out there, likely older than mine, who are brilliant pet owners, but I’d imagine there are plenty like Little Man and Boo too!

(Update! Please note, since they have grown, they now have a new cage, which you can check out in The Guinea Pigs Have A New Home!)

Our guinea pigs live inside, their cage is in the kids playroom. It’s a great spot for them as it is central to the house so they see many of our comings and goings throughout the day, whilst also being kept away from drafts and kitchen smells. The kids eat their breakfast in the playroom daily so they get company as soon as we’re up and about.

I do like having them inside as along with me not worrying about them in bad weather or having to go outside and tend to them in the pouring rain, it means that they are very used to us. We see plenty of them so they are never out of sight and forgotten. Of course, I wouldn’t forget them, but the kids may well have done over the winter, whereas this way, they are with them all the time.

We recently treated them to some new ‘furniture’ buying them a cosy sack, a cosy tunnel and a couch – it even has little throw cushions on it, I love it! And yes, so do Jessie and Leia. They both like to snuggle up in them and Leia loves running through any tunnels that we provide her with. We bought these latest additions from Paws up 4 Cosy Pets, if you’re looking for a similar thing for your piggies. 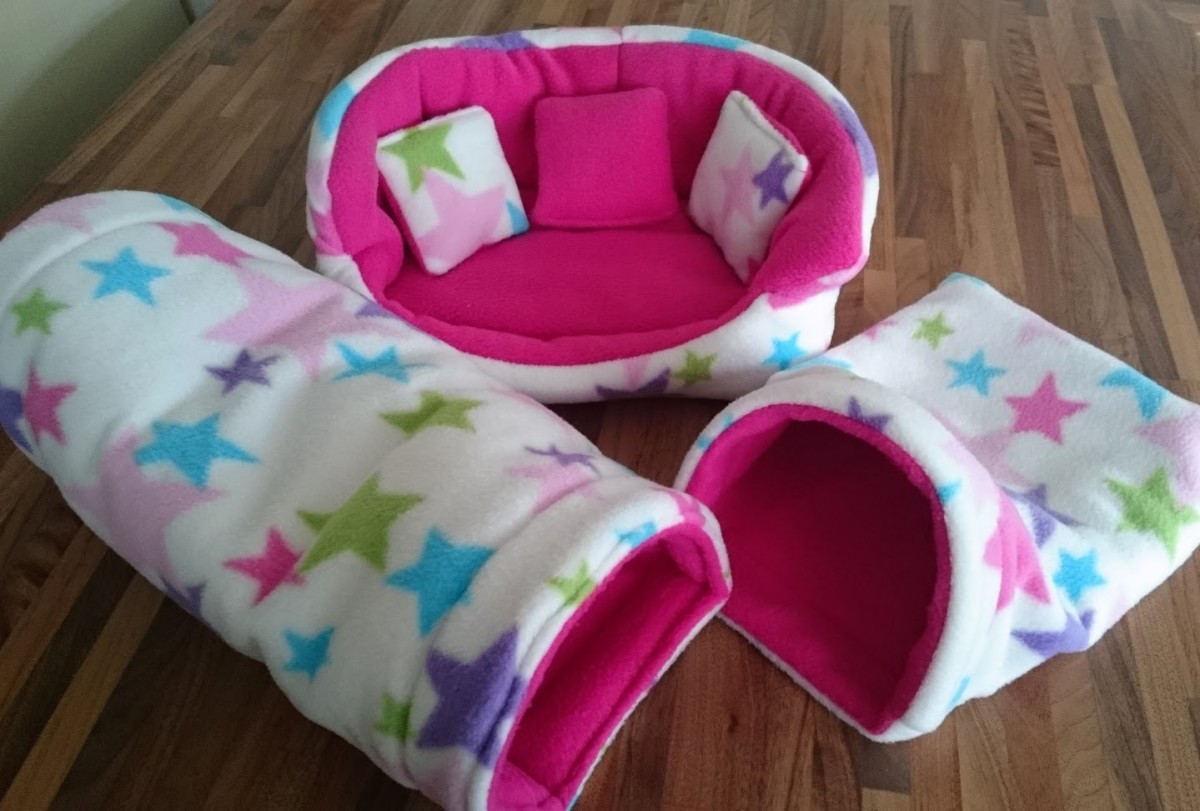 Since also discovering the joys of the balls that help me clean my fleeces, the cage clean out and keeping them bedded on fleece has become even easier and definitely the right choice for us. 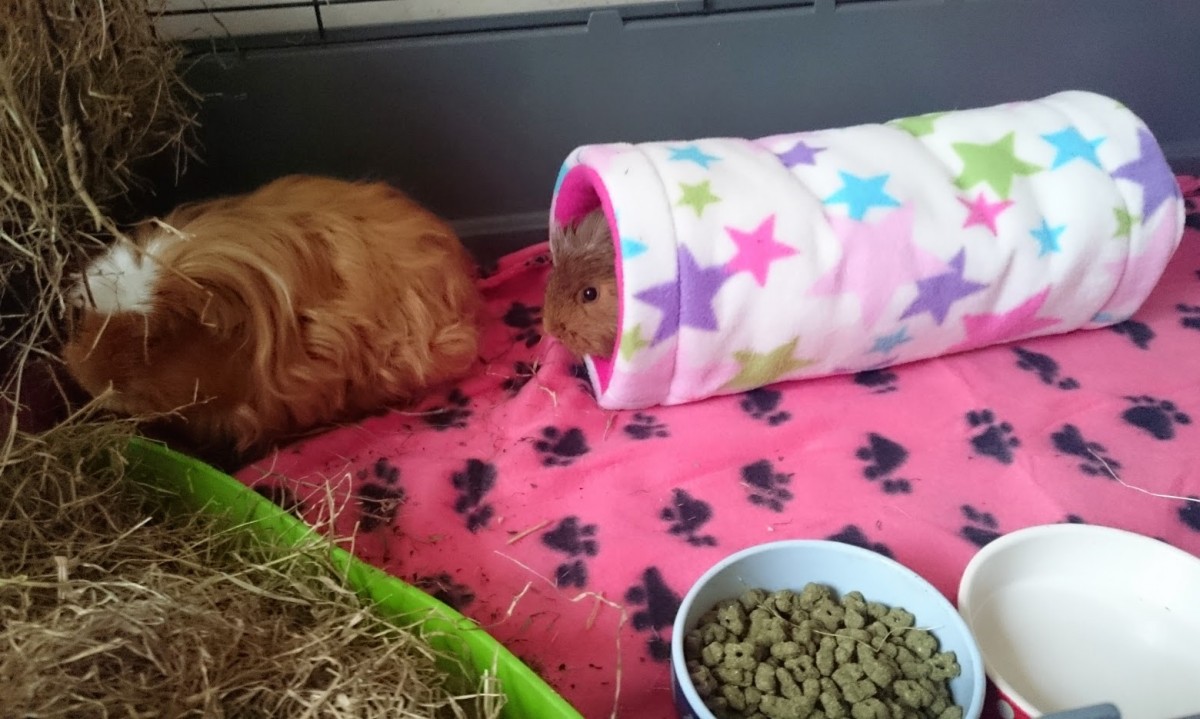 As to food, well, guinea pigs consume a fair bit!

They always have fresh hay available. Shortly after I brought them to live inside last year, I feared that I was allergic to them as I felt just awful and was having to take two to three antihistamines daily.

I did a fair bit of research and it turned out that I was allergic to the hay that they had. Guinea pigs have to have hay, so removing it wasn’t an option so I tried a few different hays until I discovered that I’m OK with Orchard hay.

Phew! Not always the easiest one to get as it is rarely stocked in pet shops, so I order online. Problem solved anyway.

They then have Science Selective Guinea Pig food which I’ve been really impressed with.

They used to have the muesli type foods, but I know that they aren’t considered that good as often the pets will just eat certain things they like in it and not all of it.

The pellets they have now have all the vitamins and minerals that they need in every pellet and Jessie and Leia really like it as they eat it all up daily, which they didn’t do with their other food.

As to fresh food, which they have twice a day, they adore and I mean adore, cucumber.

Leia loves peppers, any colour, and they both like kale. They’ll eat carrots and cabbage if needs be, and they enjoy broccoli. Oh, and dandelion leaves are a huge hit, too.

They get various combinations of these foods daily.

Obviously they need food and a comfortable home. They also need exercise so they come out and play in the living room and playroom.

Leia is definitely the more confident and playful of the two, as she’ll come over to me, whereas Jessie pretty much stays put! Now that the weather is brightening up, they’ll be able to go in their run on the lawn over the next few months.

They do like nibbling the grass (in case you’re not guessing from the long food lists, guinea pigs like to eat!). 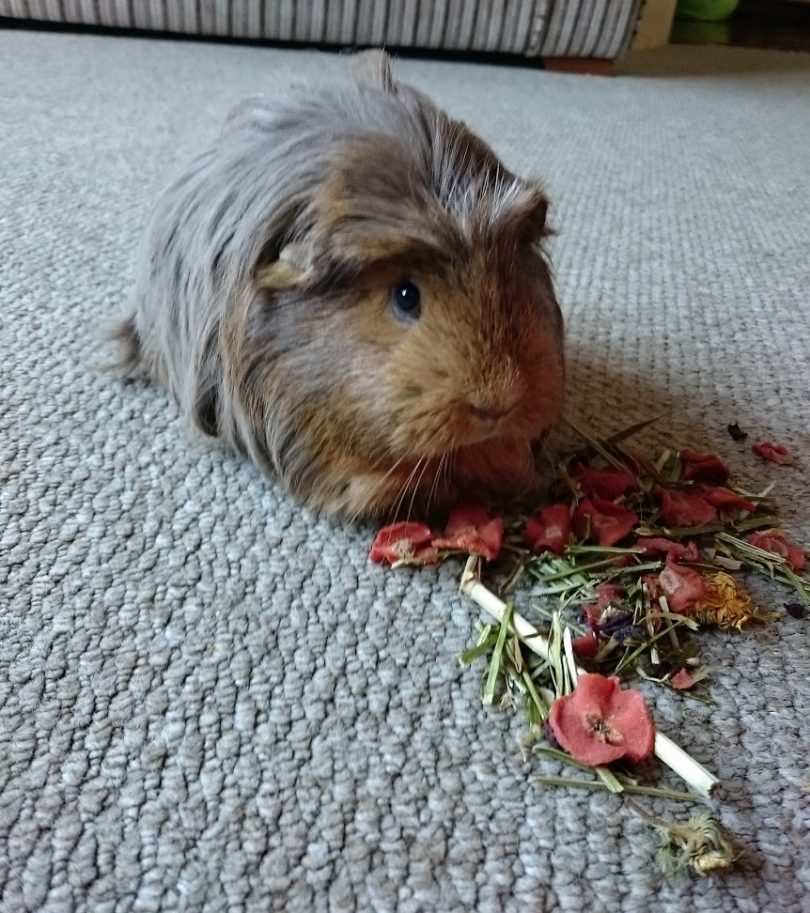 The Husband is also brilliant at cutting their nails regularly and keeping them short. We have pet nail clippers which make it easy to do, you just need to ensure you don’t cut too short as it can make them bleed. That’s happened just once, so Jessie got a lot of extra cuddles that day. 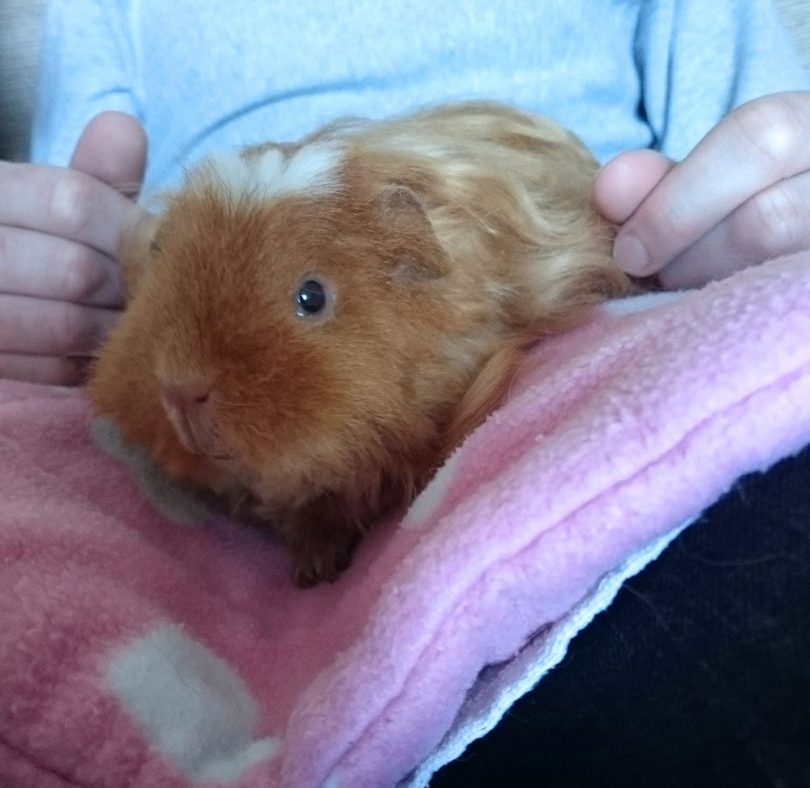 As both of our guinea pigs are long haired, they can easily get their hair matted.

This is one of the reasons that I like fleece for them as a bedding as it means they don’t get bedding stuck in their fur, but even so, they can sometimes get hay in there. It means they’ve had a few baths, which they don’t really mind.

As long as the water’s shallow and their heads do not get wet, they are OK. That’s also where they’ve both had haircuts, and again, they were fine, and it definitely reduces the chances of their hair matting. 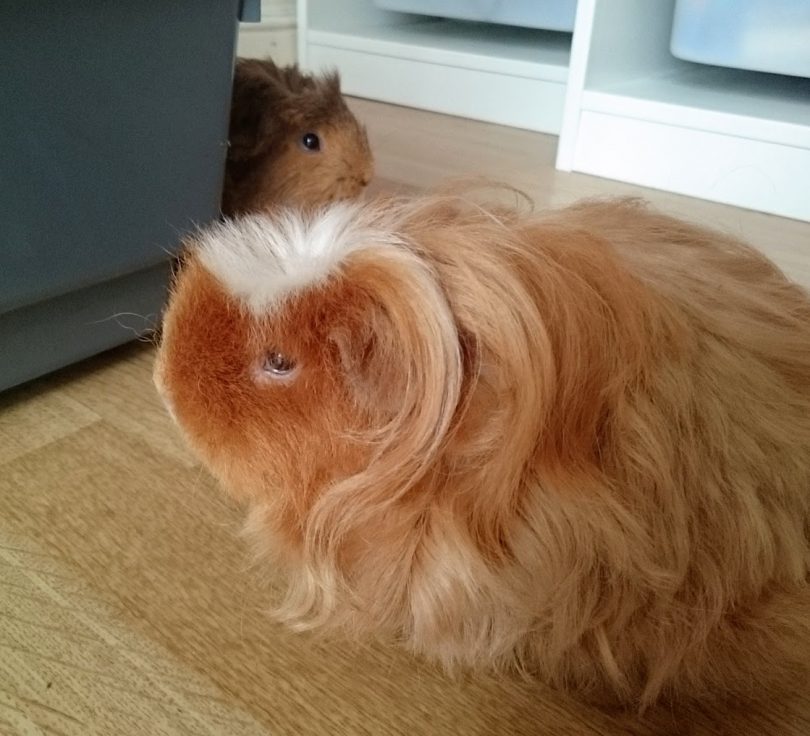 All in all? They eat and poo a lot.

That’s where their maintenance exists really, so expect to be feeding them and cleaning up after them very regularly! But they are so utterly adorable.

They are cuddly, they are friendly and tame and they make no noise aside from when feeding time is coming up – I can never forget to feed them as they tell me when dinner time is every day! It’s very sweet to hear them wheeking.

We do love them, cute little piggies.

Have you got guinea pigs?

6 thoughts on “Life with Guinea Pigs”