My Little Man loves Mr Tumble. Oh yes, he is totally mesmerised by him, along with many other toddlers, I suspect. So I was pleased to receive this new educational toy for him to try, in our role as KD UK ambassadors… 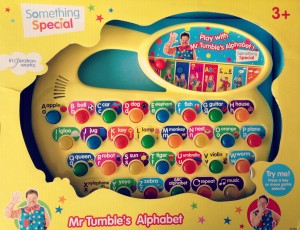 This interactive Phonics has eight great games to learn all about letters, alphabet and word recognition while having fun with Mr Tumble.
There are also 26 chunky backlit keys with colourful Something Special illustrations and sounds, which offer a great way to discover new words, sounds and spelling.
Children will love hearing Justin ask them questions and guiding them through the games.
Age Recommendation: 3 Years +

This one arrived while Little Man was napping, so I whipped it out of the box for him, with the help of Boo, ready for him to explore when he woke. Boo was exclaiming ‘oh, he’s going to love this!’ as she was unpacking it, which she did easily herself, as there are no frustrating cable ties or similar in this box. And again, as I’m finding with KD products, the batteries are included, which always earns them brownie points with me.

It’s a nice size game (you can get a feel for it in the photos below with Little Man), the kids like the carry handle and it’s light to walk around with. I can see that the bright yellow covered in vibrant colours and flashing buttons would appeal to little ones, too. It feels sturdy and up to the task of withstanding lots of bashing about, as seems inevitable with Little Man’s toys!

With the different games, this caters well to different development stages and ages. Boo moved straight to the higher settings so was working on spelling words out (with Grandad Tumble in the picture there!), which is perfect for her right now as she’s learning to read and write. But, without doubt, this is Little Man’s toy…

Little Man is coming up to 28 months, so not quite at the recommended age for this. No-one seems to have told him that, though, as he really likes playing with this one! He plays with it on the first three settings. The first is where the buttons make a noise corresponding to the object pictured. The second tells you the letters you’re pressing. The third asks you to look for certain items and press their button. He also loves playing the music and watching the lights dance around.

When he’s a little older, there’s a ‘follow me’ setting, find the first letter, phonics and then the spelling that Boo’s trying. So yes, plenty to do with this one! And it does feel like the kind of toy that will stand the test of time, so I look forward to seeing my son move on and discover each stage with this.

Would this one be a hit in your house?

Disclosure: We received this toy FOC for the purposes of this review.