Early last month YorkTest got in touch with me asking me to review their food intolerance testing services. It was something that I was keen to find out more about, and I imagine I am not alone so my YorkTest Food Intolerance test review should come in handy for a few of you too.

Now, I have long suspected that I have food intolerances, though I have never been tested.

It’s been difficult to work out exactly what I react to, though I suspected it was wheat, as pancakes and too much cake, biscuits and the like make me feel bad.

I was keen to figure out what it actually was. I will say at this point that whilst I knew that something was making me uncomfortable with bloating and pains sometimes, it was not unmanageable most of the time, so I was hoping that awareness and a reduction in whatever it was would help me. 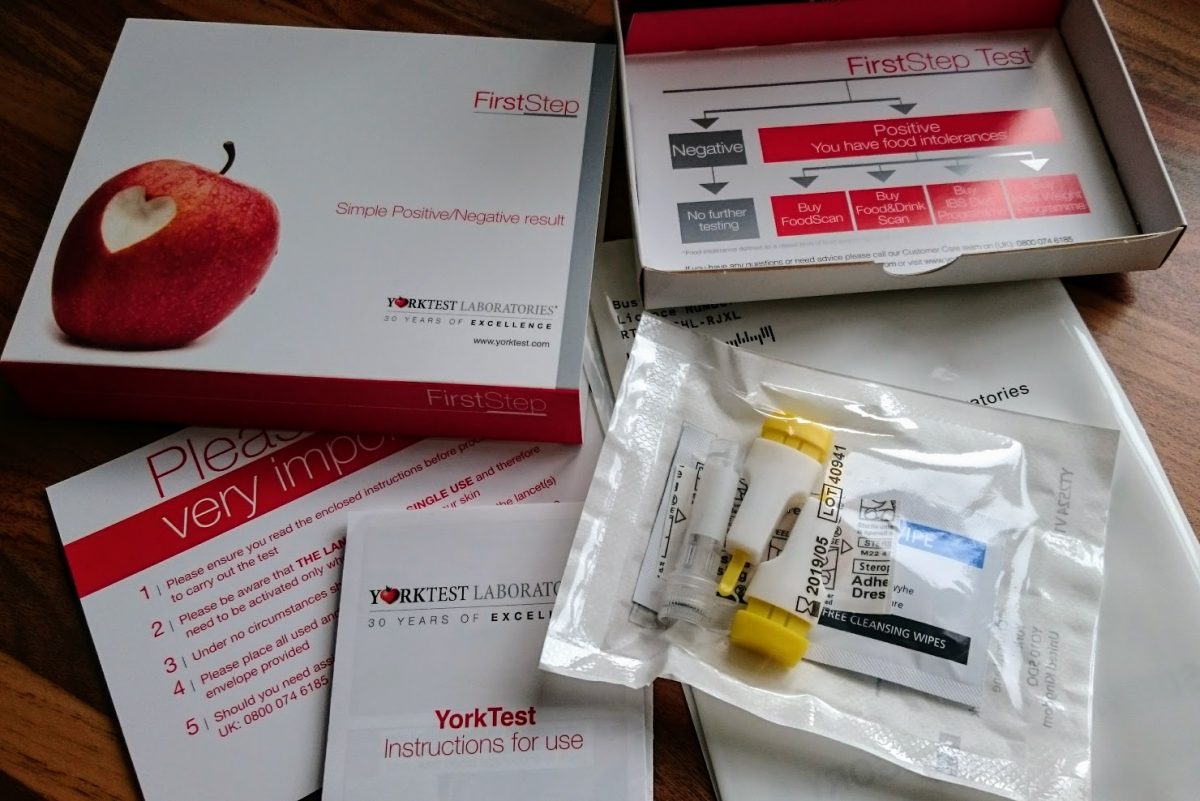 I received a YorkTest FirstStep kit in the post within a couple of days. The instructions were easy to follow, though just to be sure, I also watched their YouTube video on how to take the test.

I had to prick my finger, swab it and send it back, all in a prepaid envelope with a signed form with my details on. I was impressed with how easy this part was, all done at home within a few minutes.

As soon as my blood sample had been received, I had an email confirming and letting me know the next stage. In fact, throughout the whole process the communication was very good.

I then had a phone call a day later telling me that I had tested positive to a food or drink intolerance and so they would be proceeding to the full Food and Drink Scan, which analyses your IgG reaction to 158 foods and drinks.

At this point, if you’ve paid for the First Step test, you are given a choice as to whether then take the full scan. I was advised that I would receive my results via email within a few days and then by post, too.

The results came back to me within a week of me sending in my blood sample. Included in the parcel is a guidebook explaining the results, a handy food and drinks diary with tips along the way and the results themselves with colours indicating whether I’d had a ‘reaction’, ‘borderline reaction’ or ‘no reaction’ to the foods and drinks tested.

They revealed that I had tested positive to an intolerance to cow’s milk and egg whites. My initial reaction? Noooo!

I LOVE eggs, seriously, I eat them a lot just on their own. And then there is the fact that they are in pasta, pancakes, cakes…need I go on?

So initially I was pretty sad, to be honest, as I saw a lot of difficult changes ahead of me. When I thought about it, the results did feel right, as as I mentioned, pancakes were the worst offenders, and they do contain a fair portion of both milk and eggs, so it would make sense that I’d already worked out that they were bad news for me.

Similarly the cakes and biscuits. In addition to this though, I know that I cannot eat lots of apples, too much fructose is bad for me, yet no reaction showed up to apples on my test.

I resolved to ask my nutritionist about this at my first consultation.

Included with the testing is a telephone nutritionist appointment.

As soon as you have your results there’s a number to call and book it in at a time to suit yourself, and you’ll have up to half an hour to chat things through, though I found I only needed half that time. I had noted down a few questions to ask and she helped me to understand my results, gave me some useful websites to look at and talked me through alternative foods.

I asked about the apples and that’s when I learned about a group of foods called FODMAPs, a whole other issue!

As I already knew, I can eat apples and one will have no affect on me, but when I eat several (or too many of a lot of these FODMAP foods) that’s when I react to them. So it’s a little different to this testing as with cow’s milk and egg whites my body simply can’t break them down properly, whereas with the FODMAPs it’s more about the quantity and balance of other foods.

This made sense to me. She also explained to me that eliminating all eggs and cow’s milk (or any animal’s milk) would be the best route to go down for at least 6 weeks, ideally 12, and then look to slowly reintroduce them. However, as I advised her that I eat a lot of eggs, she suggested that by simply cutting our eggs in their pure form may help me, similarly with the milk.

The first thing that I looked at were the easier changes that I could make to see what impact they had. I have cereals every morning, so I switched to trying soy milk, then almond milk on these, until I have now settled on A2 milk. I also have this in my tea, though I am drinking more loose leaf herbal teas now, as well as water throughout the day.

I have a yoghurt most evenings after dinner so I now have Alpro yoghurts instead. That’s as much as I’ve done with the milk, though I am very aware that is in a lot of products from ketchup to gravy. I have not cut it out when in other products, milk chocolate, ice creams, creamy sauces and so on, but I have very much reduced my intake of it when it’s like this.

The eggs are trickier as eggs are everywhere! But I have not eaten an actual egg since I got these results (I used to have omelettes, scrambled eggs, fluffy eggs, fried egg sandwiches and so on a few times a week) and I similarly to the milk, I have reduced my intake of them in other products, so less cakes and egg pasta for me.

The first thing I felt was less bloated, with a flatter tummy, hooray! But then a few more issues surfaced.

As I felt I was OK with wheat, I ate more of it. I think this was also a result of cutting other things out, I replaced them with various other high FODMAP foods, and yes, the FODMAPs came back to trouble me!

It seems I do have trouble with the wheat group of these, as well as the fruit group and most likely all of them. Sigh. It turns out that I felt worse with the high FODMAPs than milk or eggs had made me.

It was a different discomfort, one I’d experienced before with those apples, I recognised it easily.

I then switched to low FODMAP foods for a week to get my body back on track and since then I have balanced my intake of all of these foods and have therefore introduced different foods into my diet as well.

I know I can tolerate most of these foods, it’s about getting the balance right with them, so I have been really learning to listen to my body and think about the different foods that I am putting into it, which I think can only be a good thing.

I had my consultations a little over one month ago, how am I feeling?

Well, it’s been quite a huge learning curve. It’s been hard. Much of my diet was made up of food that contained either eggs, milk or high FODMAP foods.

A typical day of food for me would be: Weetabix/Shreddies with milk for breakfast, an egg sandwich for lunch with fruit and crisps, then pasta in a creamy cheese sauce with bread for dinner followed by a yoghurt. Of an evening, I’d often snack on milk chocolate, greek yoghurt with meringue nests and fruit or ice cream. So yes, all eggs, milk, or wheat based foods.

Over the first couple of weeks, where I had the FODMAPs issues too, it was difficult.

I ate different things to everyone else in the house and consulted my lists, read ingredients and meal planned with precision!

I still sometimes eat differently to the rest of my family, giving me more cooking to do of an evening – getting young children who love pizza, nuggets and pasta and a fairly fussy husband to eat differently with me is a whole other challenge, and it’s ongoing! But I have found easy things I can eat alongside them, tuna-filled baked potatoes is proving an easy favourite, so I am getting there.

The main point, though, is that my body feels better. I know what upsets it and what doesn’t.

As I mentioned at the beginning, I have never had severe issues, more discomfort that peaks at times and impinges on my day. Now I know just what to eat and not to eat, and to be careful around the quantities I eat of food types.

I have continued with my A2 milk and soy desserts as they’re an easy way to dramatically reduce my milk intake. I am not eating eggs as eggs.

I have low FODMAP cereals such as Rice Krispies and cornflakes. But then there’s a balance. I still eat ice cream, I simply love it. But I eat a lot less of it and I ensure that on the days that I want some I eat no other milk products or the following day. Similarly, I’ll still eat pizza, but I’ll likely have rice or salad for lunch, ensuring it’s the only wheat I eat that day. You get the idea.

I feel more in control now. I have adapted to alternatives, I have been trying new foods. I know that when I’ve important or lovely things planned to avoid all foods that I react to for a few days so that I can be sure I will feel at my best. And the bonus? I have lost weight, too. It’s a win all round!

Do you have food intolerances? Or do you suspect that you do?

You might also find the Yorktest Foodscan Junior Review interesting.

Disclosure: I received this product FOC for the purpose of this review, though all words and opinions remain my own